I love historical fiction almost more than fantasy. Pick the right time period and the two aren’t that dissimilar. It’s because of this love of the genre that I set my standards very high when it comes to this sort of fiction. It is, by its nature, fiction, but that doesn’t mean it can supersede the need for it to also be realistic to the time period in which it’s set. That’s one of the hardest things about historical fiction: the author must work within a pre-defined framework to some extent, including historical accuracy and time period authenticity, yet when you take a character like Memnon of Rhodes, so little is known about the character himself that the artist can paint with a very wide brush when it comes to filling in the details. What is known about Memnon is that he was a Rhodian Greek born in 380 BC and that he spent the pinnacle of his life in service to the Persian Empire. This might fly in the face of logic since the Greeks repelled Persian invasions first at Marathon and later at Thermopylae, but those events transpired roughly 100 years earlier. In Memnon’s time, alliances have shifted and cultures mingled to the point where Memnon and his brother, Mentor, find themselves serving multiple masters throughout their lives, and seldom is that person Greek.

I mentioned from the outset of this review that I hold historical fiction to a high standard. Memnon met and even exceeded this level with its characters, story, and writing. It really hit all the high points for me. Memnon is a well-thought out character who deserves to take center stage. Yet he is surrounded by such a rich supporting cast who are as diverse and full of depth as Memnon himself. The story is perhaps the most interesting part of the novel. Again, we know when Memnon was born, when he died (including the circumstances around his death, though, admittedly, even those are open to question), and that he eventually faced none other than Alexander the Great when the young Macedonian king began his campaign to conquer Persia. What we don’t know is most of what happened to Memnon between those points in time and that’s where Oden really shines.

The story begins long after Memnon has died, when a young poet and scholar named Ariston is mysteriously summoned to an estate called The Oaks. Upon his arrival, Ariston is introduced to a woman named Melpomene. Melpomene has a story to tell, one which not surprisingly is about Memnon. 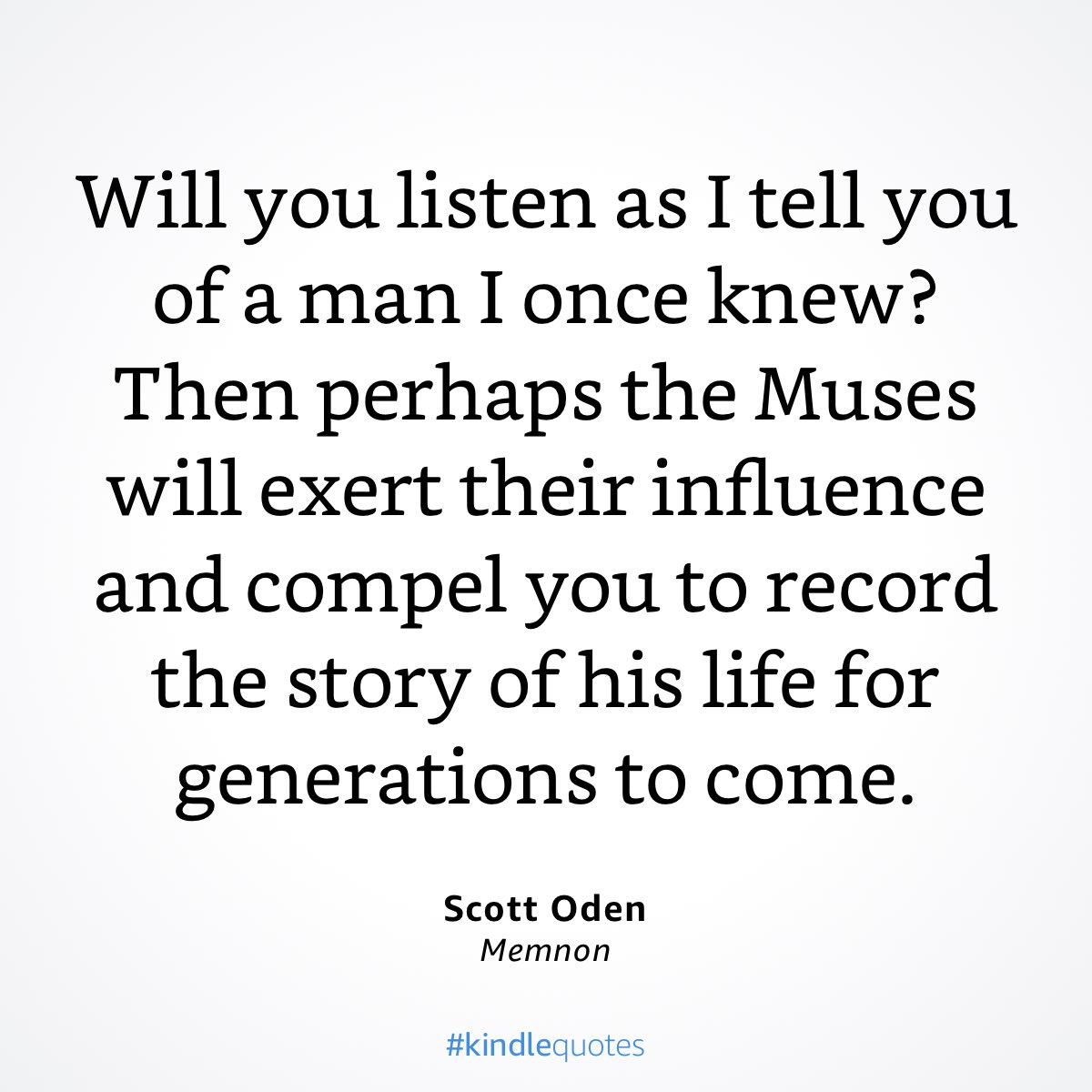 At first, Ariston brushes off Melpomene’s request, but she wins him over with her passion, and so begins a telling of the story of Memnon of Rhodes that otherwise might have been erased by history and the cruelness of victors. We are taken to Rhodes, where a young Memnon seeks independence from his father, Timocrates, and his parental expectations. A young thrill-seeker of sorts at this point in his life, Memnon’s plans to sail away onboard the Circe go awry when a political uprising results in the death of his father. Forced to flee, Memnon begins a life of service to others as a mercenary. At first bold but uncertain of himself, Memnon over time will become a formidable soldier and an excellent tactician, so much so that he is eventually entrusted with the defense of the Persian Empire against Alexander and his Macedonian army.

Along the way, Memnon forms many bonds and relationships and even makes his fair share of enemies. Standing with him always is his brother, Mentor, who as the older brother has his own path to follow. Yet even when the two are not physically alongside one another, their bond, born of blood and a shared exile, is unbreakable. Memnon is an honorable man. His word, once given, is insoluble, and his loyalty unshakeable. As a reader, he’s a character I could easily get behind as he embodies so many strong attributes. Yet for all of his strengths, he does have weaknesses. Chief amongst these is uncertainty born from simple inexperience. Fortunately for him, he has others to lean on during these times to see him through.

An interesting aspect of Memnon’s life is that at one point he is actually in service to King Philip of Macedon where he observes Alexander’s early genius as he is tutored under Aristotle. Even then Memnon recognizes the danger Alexander represents should be ever come into his own.

Eventually, tides shift, and Memnon and Mentor’s exile is lifted. They leave Philip’s service and return to their home to claim what is theirs under Persian law. While Greek, the brothers are aligned with the Persians through ties established by their sister’s marriage to Artabazus, a Persian aristocrat. Peace, ever fleeting, is short-lived as Philip unexpectedly dies. The enemy who is known becomes one far more dangerous in the form of Alexander, who becomes King of Macedonia and soon begins a campaign of conquest that will see him facing off against our titular character. Given Alexander’s success, it’s not that difficult to figure out Memnon’s ultimate fate (though I will say that I guarantee you it is not what you’re thinking). From the historical record, such as it is, we know that Memnon is perhaps the only military leader who gave Alexander pause. Yet there can be no delusions about who ultimately comes out on top. Still, it was with a heavy heart that I continued to read, drawing ever closer to what I figured had to be an inescapable conclusion.

I voiced such a concern on Twitter and received this response from the author, Scott Oden:

What unfolds is indeed a series of battles that I can only describe as spectacular and right up there with some of the best battles I’ve had the pleasure to read in historical fiction (think Bernard Cornwell, surely one of the best of them all). Memnon gives Alexander such grief I imagine Alexander remembered their contests right up until his dying days.

Memnon isn’t all about battles, though. There’s plenty of political intrigue, fleeting alliances, and a love story that has the potential to split Memnon and Mentor apart. The woman who attracts each of their interests is Barsine. Bound by duty, she makes great sacrifices to ensure alliances and that their lives remain safe and secure. At first a seemingly fleeting character in the narrative, as she appears in and out of Memnon’s life, she becomes a central figure in the story over time and perhaps, looking back over the totality of the book, takes on an even larger role than Memnon himself.

Memnon by Scott Oden earns a solid five rocket rating from me. The characters, writing, and story are all superb. Do yourself a favor and add this one to your reading list.

The Memory of Earth
by Orson Scott Card

This one fell flat on its face for me. DNF.

To Fall Among Vultures
by Scott Warren

A one rocket bomb. I couldn't finish To Fall Among Vultures due to the erratic writing, flat charact...