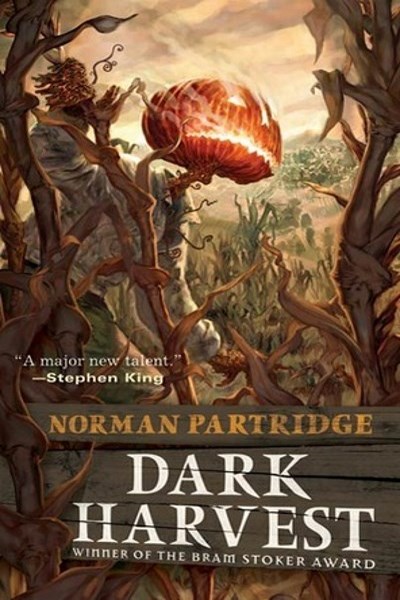 Let me say this straight out: Dark Harvest by Norman Partridge is the perfect Halloween story. Well-written, engaging, full of rich characters, and with a villain that’s about as sympathetic as you can get all contribute to a true page-turner. Dark Harvest won the Bram Stoker Award and was named one of the 100 Best Novels of 2006 by Publishers Weekly. It comes in at about 200 pages with a style that’s so relaxed it didn’t take me longer than a few hours to finish reading.

Part folklore, part small town horror tale, Dark Harvest tells the story of a once a year ritual when, on each Halloween night, a pumpkin-headed creature called the October Boy rises from the cornfield armed with a butcher knife to make his way into town to massacre any he comes across. He isn’t the only one on a rampage, though, because every boy in town from age sixteen to eighteen is out too, armed with knives, axes, chains, and anything else that might carve or crush the October Boy’s pumpkin skull. The boys of the town are on a hunt of their own, the prize to the one who takes down the October Boy a one-way ticket out of town and away from the bleak future otherwise waiting for them if they stay.

What starts as a fairly straightforward monster hunt turns into something else entirely as we soon learn that the October Boy is a monster with goals of his own, goals that don’t necessarily start or end with slaughtering the town’s people. We are also introduced to Pete McCormick, on his first Run and eager to kill the October Boy like everyone else until he meets Kelly Haines, who left the town once but came back under dubious circumstances. She knows things, things she shares with Pete, so that soon he isn’t so much interested in hunting the October Boy as much as he is just leaving his drunken father and the hopeless town they call home behind for good. But leaving town isn’t any easier than killing the October Boy, especially when you’ve got a psychopathic  town sheriff making sure no one ever leaves.

Partridge’s writing style really shines and is just perfect for this kind of a story. He isn’t shy about breaking the fourth wall with his narrative, either, pulling the reader right in as if he or she is just another member of the town. The array of characters is another high point for Dark Harvest. There is a certain hopelessness about each. The sheriff, who has committed himself entirely to the annual ritual and is most certainly damned because of it. Pete, and every other teenage boy for that matter, who sees their only salvation in hunting and brutally killing the October Boy. Even the October Boy himself, who slowly reconciles his own existence and is no more comforted for having known it.

Dark Harvest deserves the five rocket rating I’m giving it. It’s that good. This is a book I could see myself reading every Halloween.

Spookiness, unexplained mystery, and just the right amount of macabre. What more do you want out of ...