The Eyes of the Overworld by Jack Vance

The Eyes of the Overworld by Jack Vance

is part of the Tales of the Dying Earth

omnibus. Other novels in the compilation include The Dying Earth, Cugel's Saga, and Rhialto the Marvellous.

Jack Vance is one of the most prolific and popular science fiction and fantasy writers of our time. Many of his works are considered classics. The individual novels found in the Tales of the Dying Earth are certainly amongst them.

This second Tales novel is just that: unlike The Dying Earth, The Eyes of the Overworld is not a collection of short stories but a full-length novel. Here we have the character Cugel, who is likeable enough throughout most of the story, though I did find some of his qualities unsavory if not reprehensible at times. Still, he is our hero, so to speak, and it is his adventures we follow as the story progresses.

We begin with Cugel trying to sell some goods. Things are not going well, though, and at the urging of a fellow merchant, Cugel gets it in his head to go steal from Iucounu the Laughing Magician if only to acquire some magical items which he can then sell for profit. Cugel is caught in the act and, as penance, the Laughing Magician sends Cugel on a quest halfway round the world to bring back a favored item. Keeping Cugel in line is a parasite called Firx, who wraps himself about Cugel's liver and promises certain death if Cugel strays from his appointed task. Thus begins a series of odd and sometimes death-harrowing adventures as Cugel attempts to locate the wizard's prized item and return home, all the while keeping Firx content that he is in fact doing all he can to fulfill said quest.

Trouble arises when Cugel sees an opportunity for personal gain, which is at almost every turn, for Cugel is concerned with himself above all other things. He steals, he cheats, he lies, he even rapes a woman at one point in the story (though, to be fair, they are married and she does agree, but only after Cugel's extreme urging). Still, Cugel is likeable if only because nothing ever seems to go his way. He's the quintessential down-on-his-luck character who, after being beaten down so many times, we just want to see succeed even just once.

The Eyes of the Overworld is, of course, set in Vance's Dying Earth world, so far in our future that the Sun is nearing the end of its life and technology is so advanced (and its operation forgotten, in most cases) that it is more magic than science. Those who do know its operation are few and far between, and are actually called sorcerers and wizards rather than technologists, engineers, or scientists.

Vance's writing style is from another era; the book was originally published in 1966. The matter-of-fact narration is easy to follow, though, and the adventures Cugel finds himself on are engaging. The Eyes of the Overworld is a short novel, standing in at about 150 pages, and overall I found it a quick read. At a rating of three rockets, I’d recommend it to others.

Purchase "The Eyes of the Overworld by Jack Vance" 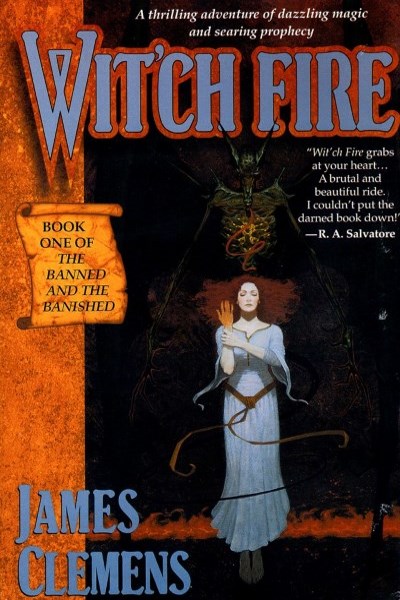 The ongoing adventures of Cugel the Clever continue in the third novel in the Dying Earth series. Wi...

Through Wolf's Eyes
by Jane Lindskold

Don't let the dated cover fool you. This is an excellent read with some truly intriguing characters.