It’s been far too long since we’ve had a Star Trek show on television. Over ten years, in fact. A lot has changed since Captain Archer and his crew brought the series back to its exploration roots, not only in the world of fandom but in the level of special effects technology. If the first episode is any indication, this new series promises to bring some spectacular special effects to the table. Visually, “The Vulcan Hello,” is stunning right from the start. Ultimately, though, special effects aren’t going to win the day. It comes down to characters and story. Star Trek: Discovery succeeds to varying levels on both of those fronts.

The show’s primary character is Michael Burnham, played by Sonequa Martin-Green. She is a Starfleet commander who was orphaned as a child when Klingons attacked her home and was later taken in and raised by none other than Spock’s father, Sarek. This has the potential to set up the somewhat atypical conflicted Star Trek character caught between two worlds a la Spock, but we see pretty quickly that this time it’s a bit different. Burnham is human, full of our species’ vulnerabilities and flaws. It’s interesting to see her in some situations so very sure of herself, especially when she is able to fall back on her Vulcan science training, but become almost hopelessly grid-locked in her decision-making when faced with a dilemma which math cannot solve, like when she is attempting to find a way to keep her ship from becoming embroiled in a conflict with the Klingons. She sinks into such a lack of focus that she must dial-up Sarek in private to ask for his advice. Sonequa Martin-Green is a fine actor best known up to this point for her role in The Walking Dead. I think she was a great casting choice for the role and, if nothing else, I’m intrigued enough with her portrayal of Burnham that I look forward to seeing where the writers take her character. Where Discovery did a nice job introducing us to Burnham, the show falls completely flat with almost every other character. The bridge is stocked full of Starfleet officers, but we are only introduced to the captain, played by Michelle Yeoh, and Saru, the ship’s science officer. Saru isn’t especially interesting and the captain is your standard Starfleet captain, likeable and sure of herself but humble enough to listen to her crew (Burnham, really, since no one else really does much) when the situation calls for it. Granted, this first episode is only an hour long, so there’s only so much time for introductions, and it was imperative that the show give its main character the proper introduction since the audience will presumably be spending a lot of time with her. This remains an area, though, where I would expect a lot of development, and fast, as we get into the second episode and beyond. 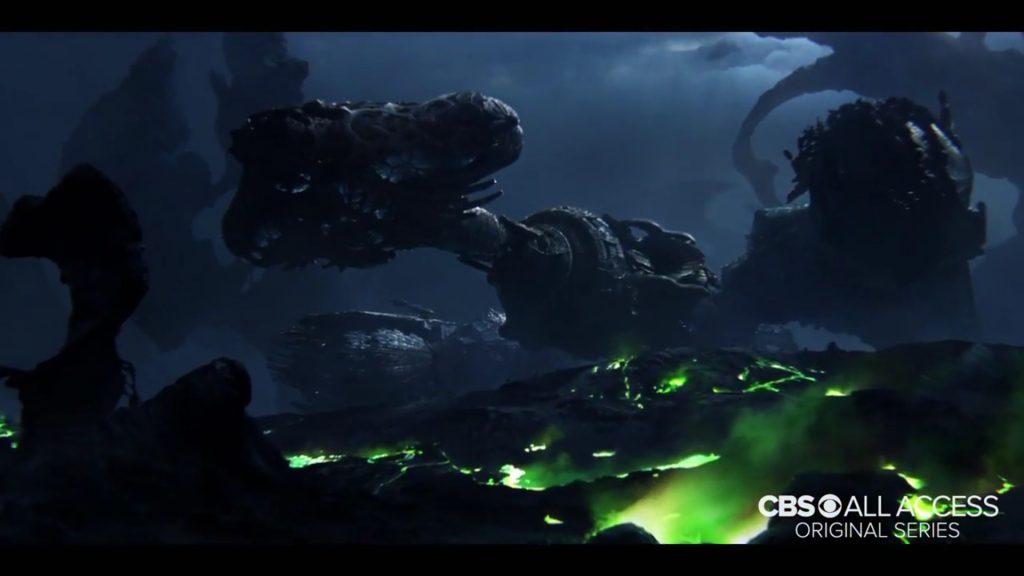 Where Star Trek: Discovery really shines is in its storyline. The Federation has had very little or no contact with the Klingons for about 100 years, so it is with great intrigue and mystery that the U.S.S. Shenzhou encounters a very strange satellite in an asteroid debris field orbiting a highly radioactive binary star. The satellite (or whatever it is) is discovered to be of Klingon origin and is a device that is very instrumental in starting what we learn is a sort of holy war against the Federation that will unite all of the disparate Klingon factions into one. What we have here is beginning of the Federation’s war against the Klingons. No neutral zone, no uneasy peace, just all-out war. That’s where it appears the writers are going with it, at least. Not that war unto itself will keep the show going, of course. Fortunately, I think we saw hints that the Klingons aren’t necessarily evil so much as driven by their need to maintain their identity as a people. There is a lot of potential here to really give us some deep Klingon characters rather than the all too familiar warrior who welcomes death.

Star Trek: Discovery takes place roughly a decade before the original Star Trek, though the show has very few similarities in appearance to the 1960’s series (thankfully). The bridge (and the lens flare) is very much in line with the rebooted Star Trek movie starring Chris Pine. Phasers and communicators will look very familiar to any fan of the franchise. The space suit which Michael Burnham uses to investigate the Klingon beacon is reminiscent of the one used in Star Trek: The Motion Picture. The uniforms reminded me of those from Star Trek: Enterprise more than any other with their submariner jumpsuit look, though the gold stripe down the pant leg was something new.

The biggest downside to this new Star Trek series? That, beyond the premiere episode, you can only watch it on CBS Online. Is one show enough by itself to justify the $5.99 cost per month? That’s something you’ll have to decide for yourself. I suspect CBS will back off on this and make it more widely available if they fail to attract enough new subscribers or they’ll capitulate and bring it to other streaming services eventually. But, for now, if you boldly want to go where no one has gone before, you’ll have to sign-up.

Stark just got back from Hell and he's got only one thing on his mind: revenge. A blend of noir dete...