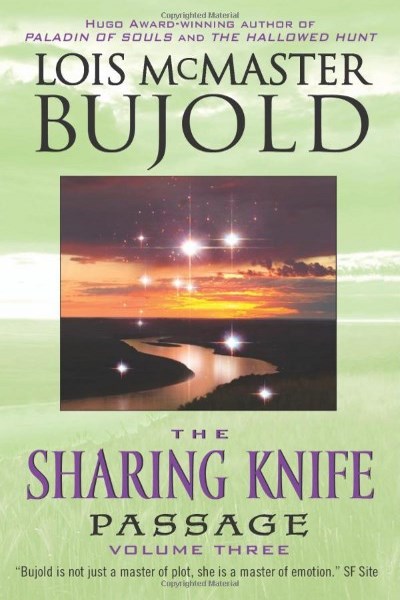 Passage is the third book in Bujold's Sharing Knife series. It is a continuation of the story begun in Beguilement and Legacy. In Legacy, Dag and Fawn come face-to-face with the bigotry of Dag's Lakewalker clan. Near driven out, Dag chooses to leave instead. But he does so with a mission in mind: to heal the rift between Lakewalker and farmer.

On one level this mission of Dag's is a personal one: acceptance of each of the peoples amongst the other would grant his marriage a greater acceptance. On another level it is a matter of long term survival for all. Because there is little communication between Lakewalker and farmer, the scourge of their land, called malices, could potentially run rampant someday because farmers remain ignorant of the early warning signs. It is with the intention of educating farmers of the malice danger that Dag sets out from his home with his wife, Fawn.

They hire themselves out to a flatboat boss, Berry, and Dag begins his journey of farmer healing and enlightenment. They are joined by two other Lakewalkers and a motley lot of farmers/riverboat-types who are drawn to Dag and Fawn's mission in their own individual ways. Much of the story focuses on this personal quest of Dag's and how, in the process, he also develops his 'ground' (magic) to a level not hereto seen in the world.

That bears some explanation: in Lakewalker society an individual is chosen early on for a specific vocation based upon the promise of their ground. Such vocations include patroller, medicine-maker, ground-setter. The principal responsibility of the Lakewalkers is patrolling the lands in search of malice; most Lakewalkers are selected as patrollers. But some others who demonstrate a greater degree of 'groundsense' may become medicine-makers or, even further, ground-setters, able to manipulate almost any material. Dag has already spent most of his life as a patroller by the time we meet him in Beguilement. In Passage, he begins to experiment with his groundsense and, aided by Fawn's knack for seeing things from her own unique perspective, finds that he has the ability to bridge the gap between patroller, medicine-maker, and ground-setter.

Passage is a good book. It's well-written, flows evenly, and possesses a myriad of interesting yet believable characters. But it also stumbles a bit in its singular purpose. Dag's quest is fun to follow, but it becomes too much of the story or, really, the entire story. Not until the end, when Dag must face a renegade Lakewalker and the mayhem he's caused, does the storyline break away into new territory. In short, I felt Passage would have benefited from a bit more going on. There is some mystery in the form of Boatboss Berry, whose family has disappeared somewhere downriver, but it's not enough.

In summary, Bujold doesn't disappoint in once again delivering a folksy tale with plenty of interesting and intriguing characters and magic. In the end, though, Passage could have used an injection of something more. Regardless, I'm looking forward to the conclusion of Dag and Fawn's journey in book four, Horizon. 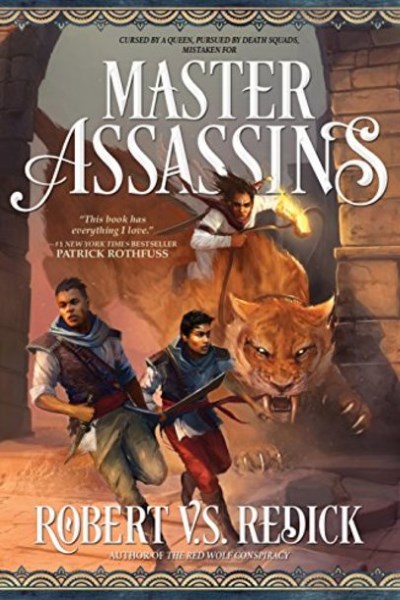