Kings of the Wyld by Nicholas Eames

One of the best gauges to measure my level of engagement with a book is how long it takes me to read it. The shorter the time, the higher the engagement and, as a consequence, generally the higher the enjoyment as well. Of course, the opposite is true as well, so that when it takes me almost 4 months to finish a book (you can see my progression of Goodreads updates below), chances are I did not have the best experience. Such was the case with Kings of the Wyld by Nicholas Eames. 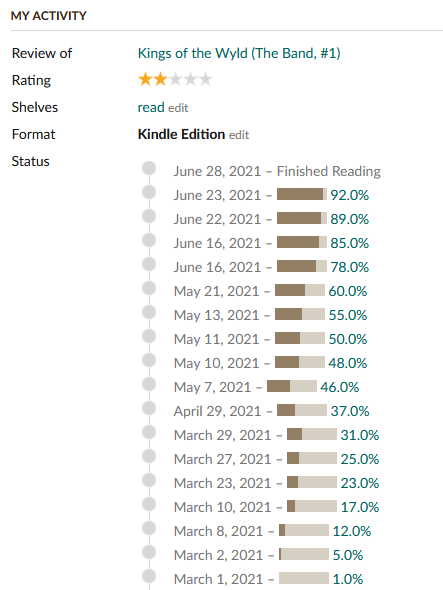 This book is highly rated—over 4 stars on Goodreads and 4.6 on Amazon!—so I was expecting greatness. The blurb certainly sets the stage for a rip-roaring adventure:

Clay Cooper and his band were once the best of the best, the most feared and renowned crew of mercenaries this side of the Heartwyld.


Their glory days long past, the mercs have grown apart and grown old, fat, drunk, or a combination of the three. Then an ex-bandmate turns up at Clay's door with a plea for help -- the kind of mission that only the very brave or the very stupid would sign up for.


It's time to get the band back together.

Unfortunately, as with so many fantasy books coming out these days, the premise sounds wonderful, but the author stumbles and ultimately fails to deliver where it really counts, which is basically in the areas of storytelling, writing, and characters. Of those three, storytelling is the best, with the characters second and the writing, third. That being said, the author does not excel in any one of those areas.

First, storytelling. The idea of a storied band of heroes grown old and moved on to more conventional pursuits but called to action one last time is outstanding and holds so much promise. The author delivers on this one, and it should have been the beginning of a great novel. But then there’s the characters, who are largely uninteresting and even kind of ridiculous at times. Speaking of ridiculous, let’s talk about the writing, which is nothing special and actually grows somewhat annoying after a while given the frequency of pop culture references. I’ll admit, they’re funny at first. But like a bad Andy Weir novel, the childish antics of our group of heroes and the predicaments they somehow get themselves into are tiring. This ties back to the time in which it took me to complete this novel. It was really hard to stay engaged and I found myself often wondering why I was continuing to read. I guess I kept thinking, it’s gotta get better, right? Sadly, it never did.

I’m giving Kings of the Wyld two rockets. It is a fun read to a point and I loved the premise. I just wish the author had come through with some better developed characters and a story that took itself a bit more seriously.

Purchase "Kings of the Wyld by Nicholas Eames"