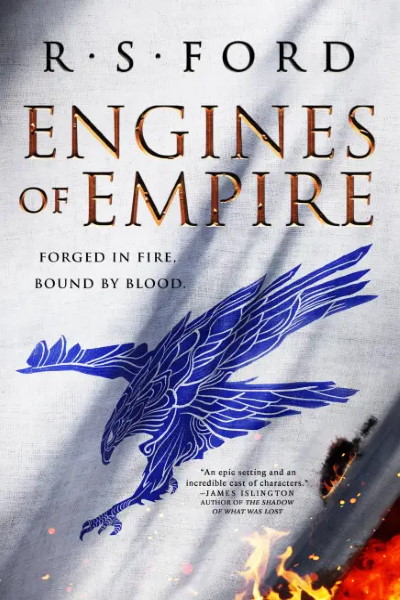 Bio: R S Ford originally hails from Leeds in the heartland of Yorkshire. He is a writer of fantasy and historical fiction.

From an unmissable voice in epic fantasy comes a sweeping tale of clashing guilds, magic-fueled machines, and revolution.

The nation of Torwyn is run on the power of industry, and industry is run by the Guilds. Chief among them are the Hawkspurs, whose responsibility it is to keep the gears of the empire turning. That’s exactly why matriarch Rosomon Hawkspur sends each of her heirs to the far reaches of the nation.

Conall, the eldest son, is sent to the distant frontier to earn his stripes in the military. It is here that he faces a threat he could have never seen coming: the first rumblings of revolution.

Tyreta is a sorceress with the ability to channel the power of pyrestone, the magical resource that fuels the empire’s machines. She is sent to the mines to learn more about how pyrestone is harvested - but instead, she finds the dark horrors of industry that the empire would prefer to keep hidden.

The youngest, Fulren, is a talented artificer and finds himself acting as a guide to a mysterious foreign emissary. Soon after, he is framed for a crime he never committed. A crime that could start a war.

As the Hawkspurs grapple with the many threats that face the nation within and without, they must finally prove themselves worthy - or their empire will fall apart. 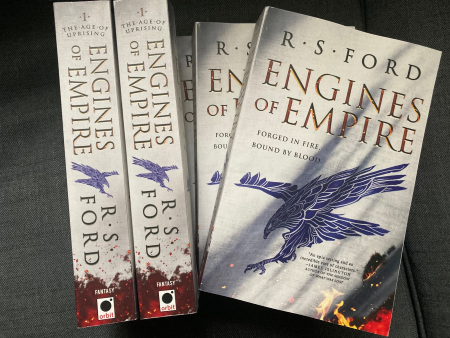 Engines of Empire is epic in many ways: scope, storytelling, and character viewpoints (of which there are at least five!) to name just a few. The story centers around the Hawkspurs, one of many guilds but by far the most powerful and influential. Our major viewpoint characters are all members of the Hawkspur family, sans one, and include Rosomon Hawkspur and her children, Tyreta, Conall, and Fulren. There is one other major character in the form of Lancelin, who is not a member of the Hawkspur family or guild but whom has a connection to the Hawkspurs nonetheless.

The book opens with a group of soldiers encountering a mysterious and powerful warrior-sorceress. It’s a good opening, full of intrigue, mystery, and a spectacular battle that, despite the seemingly lopsided odds, goes decidedly in the warrior-sorceress’s favor. As good as this opening is, it’s entirely standalone in the novel. The lone survivor of the battle has a brief appearance later on in the book, but his warning about dark tides coming is entirely ignored and really has no immediate bearing on the story. I can only assume that this minor storyline becomes much larger in the ensuing books, but I would have wanted to learn more about the mysterious woman and what role she will play in the coming strife in this book first.

After the opening, we are introduced to the world as it is today over the next several chapters before all hell breaks loose and life as our characters know it changes for the worse for all of them. A movement is afoot, and it does not have the Empire’s best interests at heart. Fulren is framed for murder, Conall finds that court intrigue and deceit exists even at the frontier, and Tyreta must flee for her life amidst distant jungles from a tribal race that has been pushed too far by the Empire and its insatiable appetite for pyrestones.

Pyrestones are magical gems that fuel the machines of R.S. Ford’s world. Honestly, there weren’t a lot of machines or devices that really stood out to me. Stormhulks, which are basically human piloted behemoths, probably resonated the most as they appear in many scenes. Unfortunately, with the exception of one scene where Tyreta uses one to great effect, hulks are mostly in the background, and only seem to be a real threat during the final scenes.

In my mind, characters can often make or break a story. Good ones make a story better, while weak or uninteresting ones can have the opposite effect. As a reader, I need to identify with their characteristics or their plight in order to really feel invested in their struggle. ‘Struggle’ is the right word here as every major character faces some sort of adversity. Sometimes its because of forces beyond their control, like in Fulren’s case. Other times it’s because a character doesn’t know how to get out of his own way, as is the case with Conall. Regardless, reflecting back on the novel, I have a hard time seeing how the Hawkspurs have remained the most influential of the guilds when really not a one of them has the chops to successfully navigate the political or even the business landscape. Let’s look at each character.

First there’s the matriarch of the family, Rosomon. She’s capable enough, but is blindsided one too many times by those who would see the empire remade. Someone with this much power should have a much better idea what’s happening around her, I felt.

Conall is the oldest son, and therefore the one person you would expect to be ready to seize the reins when he is needed to do so. Yet he’s focused on leading a scouting troop and making his mark by serving at the front. True, this is an honorable pursuit, yet one cannot help but notice that Conall is just not a very a good leader. He gets in his own way more often than not, doing himself and those of his company no favors. Like Rosomon, he is completely ignorant of the forces moving against him until it’s too late.

Tyreta is a likeable pyremancer, or one who can control the energy of the pyrestones. She has the bravado, charisma, and guts to lead her family, if only she were the oldest and not Conall. Her struggle is intriguing as she finds herself pitted against some pretty ferocious warriors. She finds allies in an unlikely place and, with their help, becomes something more than just a pyremancer. The only problem I had with Tyreta is that her transformation was not that believable. City girl to druid-like wild woman? It didn’t work for me.

Last, there’s Fulren, who I thought was the best of the bunch. He’s an artificer but also a swordsman with intelligence, a keen sense of adventure, and a wry humor. Framed for murder, he makes the best of the situation and actually thrives despite the odds against him. Another good candidate for leadership of the Hawkspur Guild.

Engines of Empire is storytelling on a grand scale. I’m not sure how many books are in the series, but it could easily go 4, 5, or even more. This first book sets the stage; I expect much more intrigue and adventure for the main characters as the story continues to unfold. There’s still the mysterious witch woman from the opening scene and whatever dark purpose she represents. I am truly interested in seeing where the author takes things. Thank you to the publisher who provided me a free review copy of Engines of Empire in exchange for an honest review. 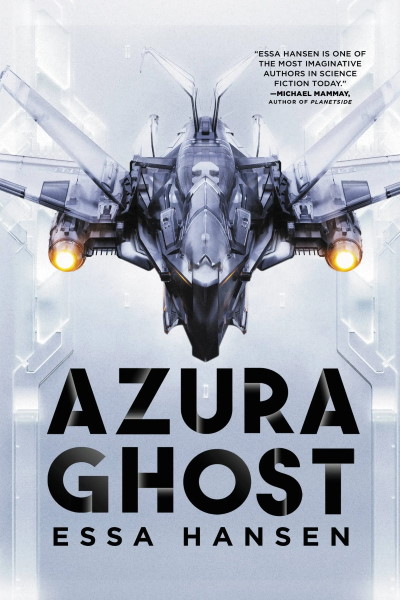 Pratt goes to great length to tell us how much of a bad ass Mason is, yet we never see that reflecte...